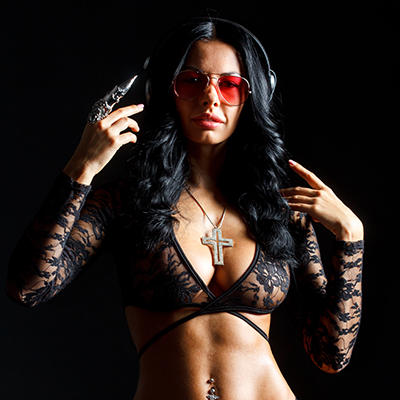 Sexy, Ambitious, Independent.... Meet Julia, better known as T-DJ Milana. Born in Ukraine, a land famous for its chilled beauty and where glamour is a delicacy, Milana is one of the dance club scene's brightest stars as a topless DJ. Her unique style of performing, stunning moves, and intense sense of music make all of her shows mind-blowing.

Though Milana began her career as topless performer in 2007, she had a very successful previous career as a professional model. At the age of 8, she had began to practice all kinds of dance – from latino to hip hop. As a teenager, the young Ukrainian girl met DJ Viniloff with whom she formed the highly successful project “Quattro Hand’s Stuff.” This opened the gates to Milana’s musical career and inspired her to become an independent DJ.

Very quickly, the Naked Ambition became one of the most popular female DJ’s in Ukraine, Russia, and the former Soviet Union Republics. Her performances make use of a variety of exotic animals, fire shows, pole dances, and, of course colourful and sexy outfits hand-made by Milana herself.

In 2009, DJ Milana started a two-month tour in the elite clubs of Bulgaria, Croatia and Macedonia, which boosted her popularity. Afterward, Milana was invited as special guest at the biggest TV show in Bulgaria, “The Late Show with Azis”. In fact, in 2009, Milana completed 97 performances, special interviews, and guest appearances on famous radio shows and TV programs.

In 2010 the talented T-DJ Milana got a great new look. The passionate blonde girl become a sexy, stylish brunette. With a new image, she developed new projects and ideas. On her birthday, February 12, 2010; Milana performed her own track with a massive club event. In March 2010 the video clip for the new single started the producing career for the true temptress, Milana. A week-long tour in Indonesia, 2 further tours in Bulgaria & Russia, full of energy and variety from her new performances, Milana was thrust to new heights of musical and performance achievement.

2011 was an amazing year for Milana. The first single from her album, "Feel, Real" received support from Flash Brothers, Armin van Buuren, DJ RAP, Jesse Voorn, DJ Observer, and DJ DLG, to name a few. Paul Oakenfold featured her in his Perfecto Podcast episode 094 and James Grant in his Anjunadeep Radio show. At the end of 2011 she was voted #1 Topless DJ in Ukraine for 2011 from prestigious show business online portal www.showbiza.net. - http://showbiza.com/ua/rating/tdj/year/2011

In 2012 Milana was voted #1 Topless DJ in Ukraine for the second time from show business online portal http://showbiza.com/ua/rating/tdj/year/2012

2013 saw Dj Milana taking part in the TV show "Says Ukraine - The main talk show host country" with the theme of "Naked money’’. In August of this year Milana plays at Ibiza in Spain for the first time and immediately obtains the position of resident DJ of the biggest boat-party of Ibiza "Oceanbeat Ibiza» (https://www.facebook.com/oceanbeat.es ). At the end of 2013 Dj Milana was voted #1 Topless DJ in Ukraine 3rd time from show business online portal http://showbiza.com/ua/rating/tdj/year/2013

In 2014 DJ Milana appeared for a second time on Ukraine's biggest talk show 'Says Ukraine'. Throughout that summer she worked on the world's biggest party island Ibiza as a DJ on the island's biggest boat party 'OceanBeat Ibiza' (facebook.com/oceanbeat.es) and also at the beach club Bora Bora.

2015 will see Milana as resident DJ at Mega Park (Mallorca) as well as appearing for a third time on 'Says Ukraine' talk show. Milana made a remix for the popular Ukrainian singers and starred in his video clip : Roman Polonsky ft. Godwin Kiwinda – Shika https://youtu.be/AR3SgdmnpFY

At the end of 2015 Dj Milana was voted #1 Topless DJ in Ukraine 6th time from show business online portal http://showbiza.com/ua/rating/tdj/year/2015

Until now T-DJ Milana has performed in more than 27 countries over 9 years completing over 700 shows in that time. Her unique & extraordinary style sees her being welcomed with open arms in the world's biggest clubs.